Zappala Tropicals have long been trail blazers of exotic tree cropping in Australia.

Ever since they diversified out of sugar cane in the mid-eighties, they’ve defied pressures of pests, cyclones and bimodal rainfalls to build a commercially-successful exotic fruit production.

Over the course of four decades, the family from North Queensland have accumulated a range of exotic fruits including Rambutan, Mangosteen, Jackfruit, Pomello, Longkong, Chempadek, Durian and Black Sapote.

Today, against all odds, they’re re-writing the book on orchard development, turning their small fruit farm of 14 hectares into a business on the cusp of a boom.

Josh Maunder and his father-in-law Alan Zappala are pioneering a new way of tree cropping by growing smaller trees closer together, cutting costs on netting infrastructure, nutrient application and labour, and lessening their susceptibility to weather damage.

Their new way of doing things has resulted in less yield per tree but higher yields per hectares, and a lower cost of operation overall, said Josh.

“In the past, a lack of affordable plants and propagation material meant that growers developed low density orchards with a focus on maximising yields,” he said.

“Our trees used to be tall and unmanageable – completely defenceless to cyclones. By re-developing our orchards we’ve reduced the cost and time needed to re-establish after extreme weather events.”

In a region that averages 4.7 cyclones a year, the farm in Bellenden Ker has had its fair share of hard knocks.
In 2006 and again in 2011, Zappala Tropicals experienced the full impacts of category 5 tropical cyclones; Larry and Yasi.

Josh said orchard loss, in each case, counted for more than 60 per cent.

The cost to state-wide agriculture exceeded the one-billion-dollar mark in both instances. Some growers left the exotics industry, deeming it too risky, opting to return to sugar cane or bananas. Others left agriculture altogether.

Growers that did stay on have attempted to rebuild their operations but progress has been slow, said Josh.
“Since 2011, research and development investment into exotics has been non-existent,” he said.

“We don’t have an industry body, we don’t have a levy, innovation is really challenging because who’s going to fund a grower from a non-represented industry?”

But at the end of the day Josh said giving up wasn’t an option.

“The climate doesn’t actually support a great deal of crops on the coast,” he said.

“We’ve invested a considerable amount of money into this business. If we were to exit tomorrow, we would never get that investment back.”

Stubborn as ever, they forged ahead with a suite of innovations and adaptations designed to manage risks and develop farm efficiency.

“The question became how can we build an orchard that is resilient to weather, knowing that weather isn’t only cyclones, it’s exceptionally long wet seasons going into really dry periods?” Josh said.

“Our crops also had to be netted for protection from birds and bats, which was a logistical nightmare.

“Because we developed our orchards on marginal areas that used to hold cane, we didn’t have nice rectangular blocks. We had trees growing at various stages – some were fruiting, some were pruned, some had just been planted.”
“I thought there has to be a better way to do this. That’s when I began the process of designing new blocks from scratch.”

Josh spent the next year planning what the optimum orchard would look like for exotic fruit. Instead of making the crop fit the paddock, as was tradition, he made the paddock fit the crop.

Now the blocks are three times denser and new trees are pruned more aggressively to keep a nice structure.

“It’s an ambitious goal. We’re probably averaging 10-15 tonne a year. And where we want to go is ten times that,” he said.

“But I’m looking at it as a business not a farm. That sort of high-level, strategic decision making and planning, that’s what I’m passionate about.”

From the beginning, innovation and environmental stewardship have been important underpinnings of Zappala Tropicals with Alan serving as the president of the former exotics industry body for several years.

Josh said working alongside his father-in-law is all about striking a balance.

“He’s a doer. And I’m the thinker. We complement each other really well,” he said.

“We’re incredibly proud to be one of the only few exotic tropical fruit producers who’s Freshcare certified. We only put something into the market that is environmentally and food safety regulated.”

As leaders in sustainable exotic tropical fruit production, they’ve been forthright in benchmarking their management practices against industry standard.

In 2017, Zappala Tropicals worked closely with Growcom to become the first business to complete Hort360, the best management practice program for horticulture.

The program assisted them in identifying strengths and weaknesses of their on-farm practices and suggested key areas where efficiencies could be gained; data collection, irrigation timing and paddock planning.

This led Josh to invest in new irrigation equipment that allowed more efficient water delivery. Not only has this reduced the risk of nutrient leaching into the local waterways and ultimately the Great Barrier Reef, it has meant cost savings for the business as well.

“On the monitoring side, we recognised we didn’t have a good appreciation of how our paddocks were absorbing water,” Josh said.

“We put in moisture monitors to record data and fertigation systems which gave us a better ability to apply a different range of products and minor dosing.”

Armed with good science and a strong vision, Josh is forging ahead with robust plans for the future.

His long term vision is to be a leading producer of exotics in Australia, if not number one.

“That opens up a whole range of things for us from a business point of view. Can we contract other farms to grow for us? Can we build a standardised packing shed that takes produce from regional areas and is packed under our branding?” he said.

“In the back of my head, I’m thinking about a second operational location in a different geographical area to minimise our risk of exposure to weather.”

“The exotic industry is probably less than 0.1 per cent across all of horticulture production in Australia.

“But if we can get our efficiencies right, then we should be well positioned to grow exponentially in the future.”

Zappala Tropicals is featured in the October 2019 edition of Fruit and Vegetable News. 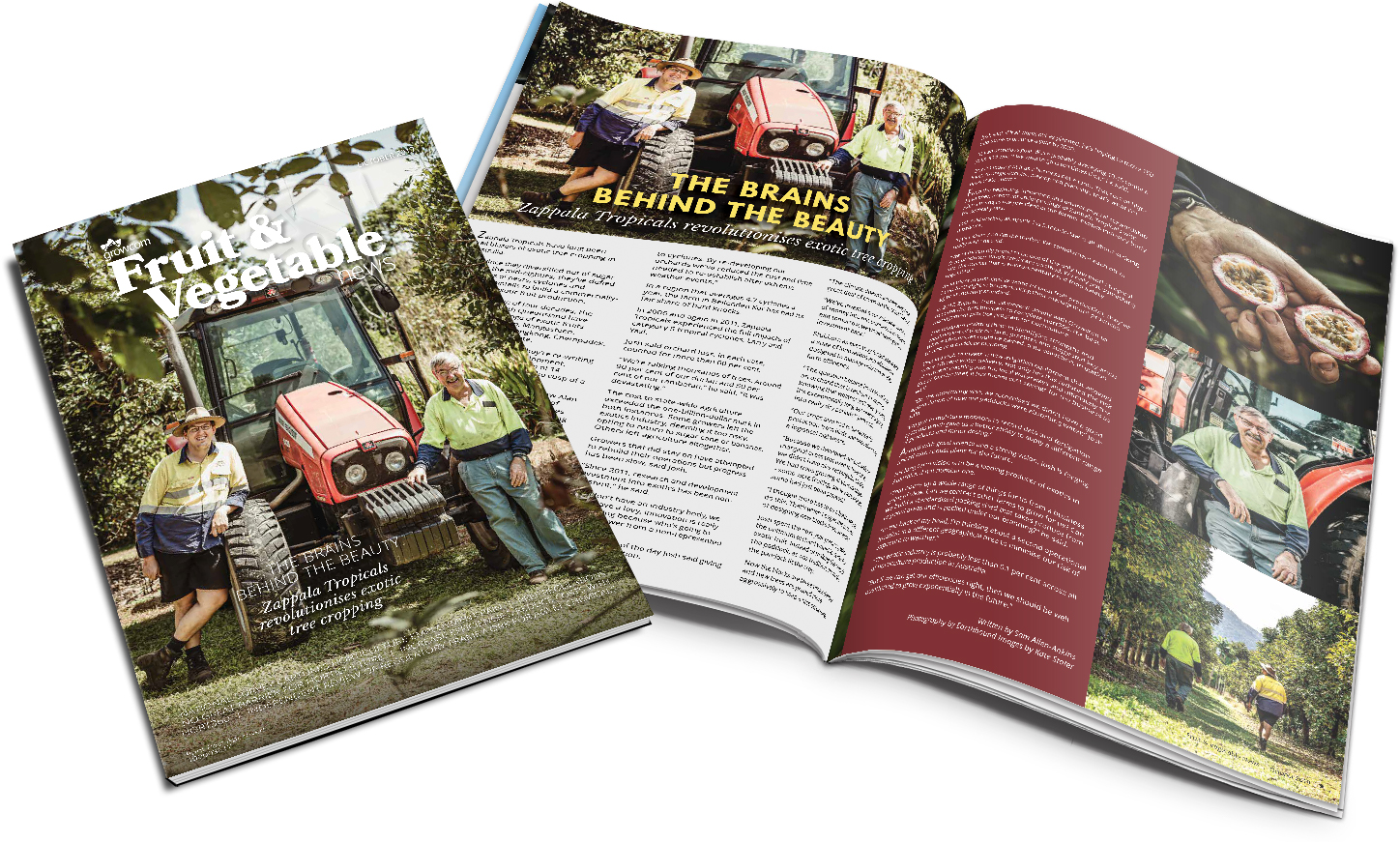