As you drive into Mulgowie Yowie Salads located in the Lockyer Valley you’re greeted at the farm gates with a sign depicting a Yowie and a driveway lined with rosemary.

Mulgowie Yowie, which is in the process of obtaining Fair Farms Certification, took some time with Growcom’s Fruit and Vegetable News magazine to talk about the farm and how they’ve been dealing with the effects of the pandemic.

Farm owner and Growcom member Shannon Moss made the decision to move his Stanthorpe farm after the Queensland floods in 2011 and relocate to Mulgowie where he and his young children aptly named the new farm ‘Mulgowie Yowie Salads’.

“We started moving out of Stanthorpe in probably February in 2013,” Shannon said.

“The kids actually named it Mulgowie Yowie – I was just going to call it Mulgowie Fresh Salads.”

A second-generation farmer Shannon grows a variety of salad leaves including rosemary which grows in abundance on the farm and all originating from one plant, as well as a variety of other fresh produce.

“We do a lot of woody herbs, perennial herbs: coriander, dill, parsley, we also do spinach- baby spinach.

“We also do a lot of rocket and four-leaf mix salads for domestic markets.”

While Shannon is known for his fresh, vibrant herbs and salad mixes he is passionate about also growing pumpkins.

While the news of pumpkin sales may have been a saving grace during the pandemic Shannon said the economic effects of the pandemic were still very harsh.

“Sales this year were good, sales were terrible last year – shocking even,” he said.

“We were probably down over a quarter in wholesale market worth.”

Like many farmers dealing with the harsh reality of inter-state and international border closures and COVID restrictions Shannon said the hardest thing to reconcile due to the pandemic beside the economic problems was staffing.

In addition to ensuring he had enough staff for harvest Shannon said he knew he needed to ensure compliance with any requirements to do with payroll and workplace health and safety.

“Staffing is my number one problem,” Shannon said.

“From a business point of view as an owner I get nervous when there’s staffing issues.

“We don’t have a real population of workers to pull on.”

Mulgowie Yowie Salads will usually have a good mix of overseas and local workers but in recent times has had to rely heavily on local workers.

“Now that schools over I’ll get a few of the local boys when they finish school to work here – even my son works here now – he’s on a gap year from school,” Shannon said.

“I’ll end up with enough staff and I work really hard at that.”

While staffing has been hard Shannon said he has been able to get through by focussing on staff retention and by engaging with Growcom’s Fair Farms program to ensure he was doing everything he possibly could to ensure his employees and business were safe.

“This year we did a lot of work on workplace, health and safety,” Shannon said.

“Fair Farms where it works in, is having real set procedures on training, the induction process, the VEVO checks (identity checks), and we’ve already done that without Fair Farms, but Fair Farms gives us a better checklist.

“I think that’s where Fair Farms comes into it – it’s a checklist, what you need to do to get through an audit.

“Fair Farms is a local form of Sedex.”

Shannon acknowledged it was incredibly important to look after his staff for business continuity and their own wellbeing and credited his decision to register for certification with Growcom’s Fair Farms program as just good business sense.

“I know it’s important to have all these things to make sure the business is protected, for work cover, for our insurance, and I don’t want to work in a business where it isn’t a happy working environment too,” Shannon said.

“At the end of the day, I’ve got to put my business hat on and I’m in the business of selling product. It’s all about dollars and sense.”

Shannon said he and his team are ready for audit and are excited to receive their Certification, with plans to go through audit as soon as his farm manager is back in early 2022.

Growcom’s Fair Farms is an industry-led, national training and certification initiative that is cultivating fair and responsible employment practices in Australian horticulture. The program provides support and training to farm employers and a pathway to independent third-party audit and certification.

To find out more about Growcom’s Fair Farms program and any special offers Fair Farms may be running head to fairfarms.com.au

Mulgowie Yowie Salads is featured in the January/February 2022 edition of Fruit and Vegetable News. 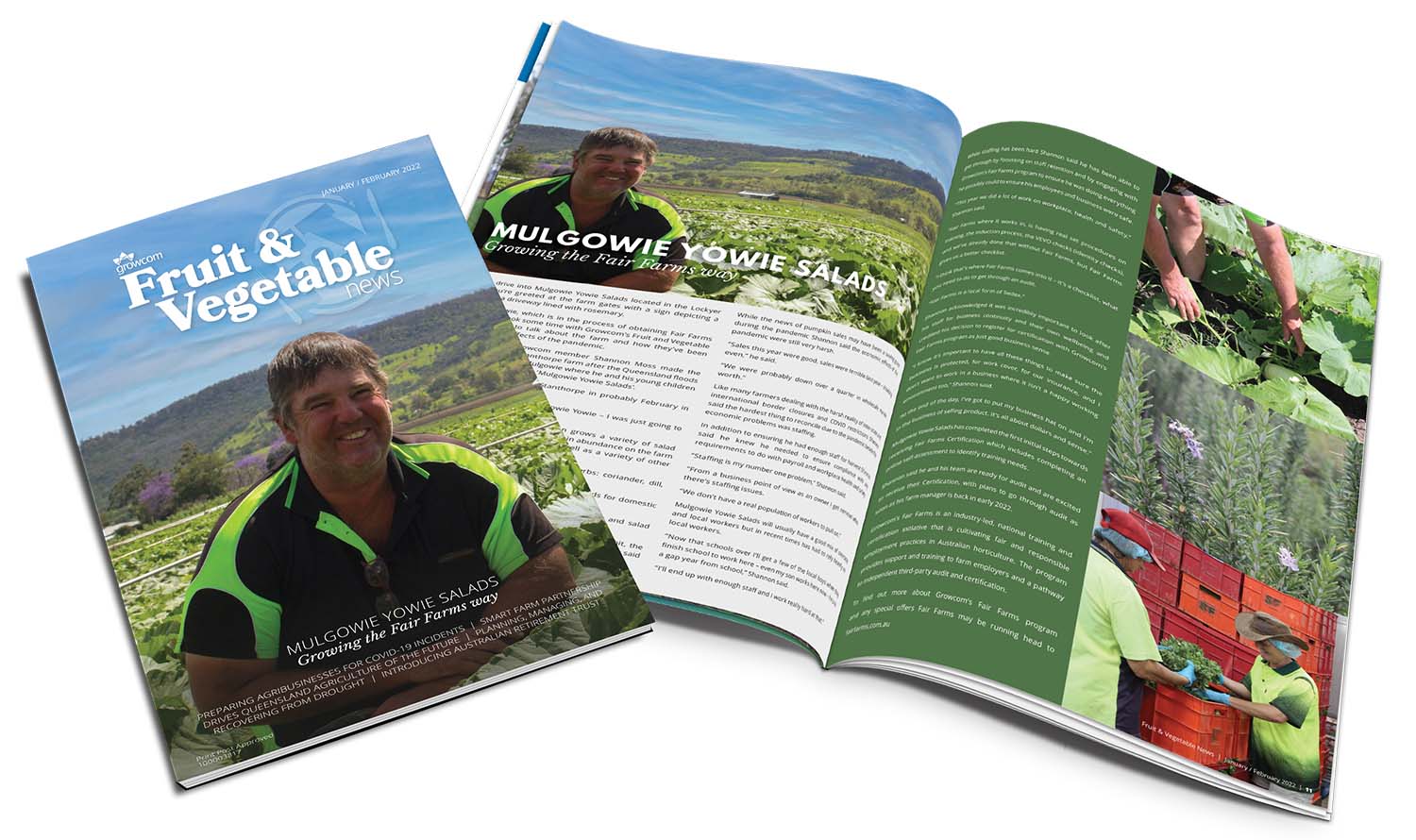