From the Lockyer Valley to Uganda  The Brimblecombe’s African adventure

Seven years ago, Lockyer Valley vegetable growers Linton and Melinda Brimblecombe embarked on an adventure that would see them farming on the other side of the world.

The owners of Moira Farming are today one of 28 investors in the Omer Farming Company located on the Ome River in Northern Uganda.

In 2013, the Brimblecombe’s travelled to Africa with a group of family and friends to build a house for the Watoto Child Care Ministries. It was from this trip that the idea of farming in Northern Uganda first developed.

“Watoto were looking to establish a farm in Northern Uganda as a source of income for the orphans they support,” Linton said.

“We had a conversation and said instead of taking donations, why don’t we make this a commercial project and have the church as a beneficiary. So that was the impetus.”

With their Lockyer Valley farm leased out for three years, the Brimblecombe’s along with son Mitch and daughter Kate, started preparing to move half-way around the world.

“On 20 January 2015 Mitch and I arrived in Uganda with some pre-fabricated container housing and five semi-trailers of equipment and we started the journey,” Linton said.

The Omer farm originally grew corn and soybeans however in the coming years would move into upland rice.

Unfortunately, it wasn’t long before Melinda and daughter Kate realised the impracticality of them living in Africa several hours from the men.

“It was a seven-hour one-way trip from where we were living in the city,” Melinda said.

“Making that trip every weekend didn’t leave a lot of time left, so we decided Kate and I would stay living in Australia and then every 10 weeks we would fly over in the school holidays.”

For the first three months Linton and Mitch found themselves living under constant threat stemmed from misconception as to their true motivation.

“The Omer farm is located in a very isolated part of Uganda and we were coming into the area on the back of the Joseph Kony war lord campaign,” Linton said.

“The conversations were still quite raw and there was a lot of mistrust in the region. We probably didn’t sell ourselves really well initially.

“There were rumours being perpetuated that we were bad people and attached to this sugar production up the road who were not doing things the right way.

“So, we changed our strategy to a more consultative one. Brought the local politician on board. This approach seemed to improve the situation, so Mitch and I were able to get on with the job of farming.”

Linton said he realised early on just how big a learning curve he was facing.

“We did not have the Growcom’s in the background providing us support, we did not have access to the Research and Development Corporations (RDC’s) doing the research and development – all those things we take for granted,” he said.

“Any R&D we were essentially it. We were starting from a very poor position and that just continued to reflect and exacerbate in the growing cycle over the coming years.”

As the year progressed there was a push from the Omer Farming Company Board to expand very quickly into new opportunities. For Linton this was perhaps one of the worst things the business could have done.

This push for expansion perpetuated in failure upon failure of crop and no income. Investors were having to put more and more money into the business just to keep it afloat.

“We were developing a very nice-looking farm that was not earning any money,” Linton joked.

“We should have stayed small and stayed with the initial plan.”

In September 2016, the Brimblecombe’s made the decision to exit the business because they no longer agreed with the direction the Board was taking.

However, their leave didn’t last long. After 12-months away from the Omer Farming Company the business had built up so much debt it was on its knees. Consequently, Linton was re-engaged as Chair and has been picking up the pieces ever since.

“We tried to manage the business for a couple of years with a local management team, but that didn’t work,” Linton said.

“So as of earlier this year, we have leased the whole business out to a third party.”

Despite all the challenges the Omer Farming Company brings, Linton said he was confident in the future of the farm.

“I think our upbringing and our religious beliefs helps us to understand it’s not only about us and our perspective – it’s about the greater good,” Linton said.

“I think this was our opportunity to be involved in that greater good.”

Linton said it didn’t really hit him until about 12-months into the project just how much of an impact they were having on the local community.

“A local politician said to me one day that we had actually improved regional security,” Linton said.

“For the first time in their lives members of the community were earning a wage. They were able to afford health care, they were able to send their kids to school or fix the thatch roof on their hut. And what that means is they are no longer reliant on thieving from others to exist.”

People often ask the Brimblecombe’s if the venture was successful. Linton said financially it has been a disaster, but it was an experience.

“Today it might seem a disaster, but we still own it. It’s like shares, you only make a loss on shares if you sell them. And we’re determined to make it work.”

For Melinda it was the many other experiences that made the venture successful.

“You tell them about the humanitarian experiences and about the improvements in the local community, to me all of that far outweighs financial success,” Melinda said.

Today the Brimblecombe’s are back home in the Australia growing a range of horticultural crops including beetroot, onions, broccoli, pumpkins, and carrots across two properties in Kalbar and Forest Hill.

Their son Mitch took over as Farm Manager of Moira Farming in January 2018. Melinda continues to work in the office while Linton supports Mitch with the day-to-day jobs.

Melinda said even though Mitch had shadowed Linton since he was three it was good that he had guidance.

“Sadly, a lot of people don’t get the opportunity to have their father around in that crucial time of learning the ropes of the farm,” Melinda said.

While Linton said the opportunity to return to Uganda had presented itself over the years, they still considered Australia and the Lockyer Valley home.

Linton has a confident outlook of farming in Australia. He admits that farming is not easy, it’s tough and long hours but the rewards are there, you just need to keep a view of the bigger picture.

Moira Farming is featured in the September/October 2020 edition of Fruit and Vegetable News. 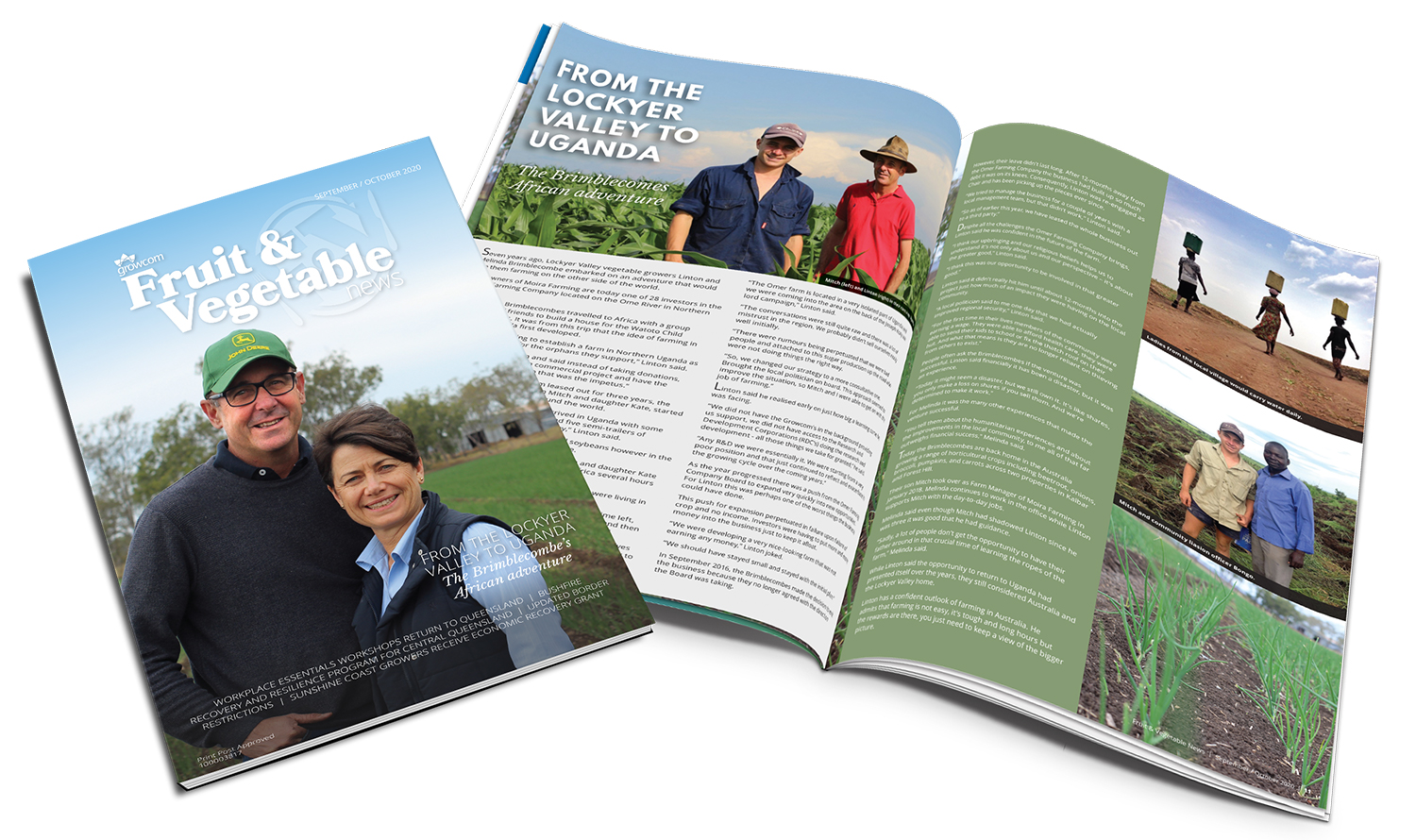