Water is a precious commodity for a farmer. Perhaps few understand that better than fourth-generation horticulturist Tim Carnell of Kirra Pines Farming, a vegetable growing operation in the Granite Belt.

The region’s growers have battled their driest summer in years where water has been scarcer than ever. Kirra Pines’ primary focus has been ensuring water security by using three semi tankers to transport surface water back and forth between nine farming sites from Glen Aplin to the NSW border. It’s a major business expense but not without its rewards which they reap with their premium quality tomatoes and capsicums.

Through several years of expansion and chasing individual micro-climates, Tim and his family have been able to extend their growing season from September through May, ensuring a constant supply of fresh produce to supermarket chains, wholesale markets and processors each year.

Targeted management has allowed Kirra Pines to flourish where other growing operations may have stalled. Tim points out a nearby farm, he calls the ‘old country’, which he grew up on. His family have since sold the property, putting the money towards consolidating debt and investing in new equipment to underpin the growth of the business.

“We had to make a few hard decisions and take a lot of sentiment out of it, but by chasing secure water, good land and equipment, we’ve been able to develop Kirra Pines to what it is today,” Tim said.

And yet the scourge of drought continues to rear its ugly head, making it hard for local growers to farm the same quality of produce year-in, year-out.

Tim said the long-waited Emu Swamp Dam project, which proposes better water access for Stanthorpe growers, would be a Godsend for the community.

“With the potential Emu Swamp Dam and the Granite Belt Irrigation Project, there is a secure water source and an irrigation scheme that can allow farmers to plan two-three-four-years ahead whereas at the moment there’s not a lot of positive news on the short to medium term rainfall outlook. It’s a concern for many of us,” he said.

While being a medium-large scale operation, totalling 95 hectares, Kirra Pines strives to fulfil the age-old adage of ‘quality over quantity’. Tim focuses on profitability, not volume. He looks at return per hectare, profit per mega litre and making rational decisions based on good quality information at hand.

Tim also stressed strong relationships with suppliers as the main reason they’ve been able to build their customer base.

“We work directly with Coles and some great processing and provedore customers who have been able to grow as we grow. We’re all in this supply chain, or as I think it should be really termed, ‘a value chain’ because we are all adding value to each other’s business. They have confidence in us, and we have confidence in them.”

Improvements in marketing strategies have helped Kirra Pines in recent years with Tim also serving as co-director of Manna Produce Group, a marketing joint-venture with Sutton Farms in Gatton.

The company was set up as a vehicle to facilitate business with Coles and provide them with a range of quality vegetable lines.

“We found synergies between our families with the products that we grew and the line items,” Tim said.

“On the first day of trading we were able to present 12 different skews into their business. It showed us the ability of mediumsize farming operations to service supermarket chains from our sheds when the right model is implemented.

“We’ve still got the freedom to market with other customers so we haven’t changed our business 100 per cent. But we’ve opened a door and said let’s work together.

“Working with people to achieve a common outcome is far more advantageous than an industry that cannibalises each other. A closed-door policy tends to be very difficult in this day and age.”

In the last five to six years, Tim has noticed a new conversation occurring between customers and growers, one which prioritises mutual benefits for both parties. Emerging markets have resulted in grower businesses joining forces to provide a variety of product lines and constant supplies. It’s certainly paid off for Kirra Pines.

“We now have a home for the end product before we start planting them,” Tim said.

But while he sees opportunities ahead, it’s not all about size.

“Expansion comes in different ways. It can be acres, it can be product lines. But it can also be value-added so it’s not necessarily about growing more for the sake of growing more.”

Some opportunities come along when you least expect them. For Kirra Pines, this meant diversifying, even when they hadn’t planned to.

“It’s very much a boutique business so you’re not going to be seeing semitrailers of product but that’s not the intention. It’s got a lot of potential and the previous owners developed a lot of popular products so we’re building on that.”

As parents of three daughters, Tim and his wife Felicity, seek to lay a good groundwork should the next generation want to be involved in the business one day.

There is already an ongoing succession plan for when Tim’s parents Trevor and Alison eventually retire.

Tim said, as is the case across all commodities, most agribusinesses are asset rich and cash poor, which makes it an especially difficult topic for family farms.

“You’ve got property values that are rising every year and you’ve got profit margins getting squeezed, so the capacity for businesses to buy the older generation out is limited,” he said.

“With agribusinesses, and in horticulture especially, we generally have the infrastructure, expertise and working capital. The money to buy properties out, that’s the challenge.”

“It takes the ability to have an open, honest conversation. We’ve ridden the roller-coaster of family succession over the last ten or twelve years which has sometimes been more difficult than others.

“Everyone wants to see the business succeed so it’s just a matter of working out what’s the best option for everyone in the short, medium and long-term.”

The farm’s history and heritage are dear to Tim’s heart as he can never disregard the origin story from which his legacy has grown.

When asked about the name “Kirra Pines”, Tim said his grandparents coined it back in 1946. After World War II, when his granddad returned from serving as a fighter pilot in Europe and Africa, they planted a grove of pine trees and named them in honour of their honeymoon at Kirra Beach.

Tim said they’ve considered changing the name, but nothing seems to stick like the original.

“We’ve thought over the years, should we rebrand? There’s the Kirra Pines name and an old 65 Massey Ferguson – the two things left from the 1960s – so we’re going to hang on to that. It’s a nice story and there’s a bit of nostalgia there too.”

Kirra Pines is featured in the June 2019 edition of Fruit and Vegetable News. 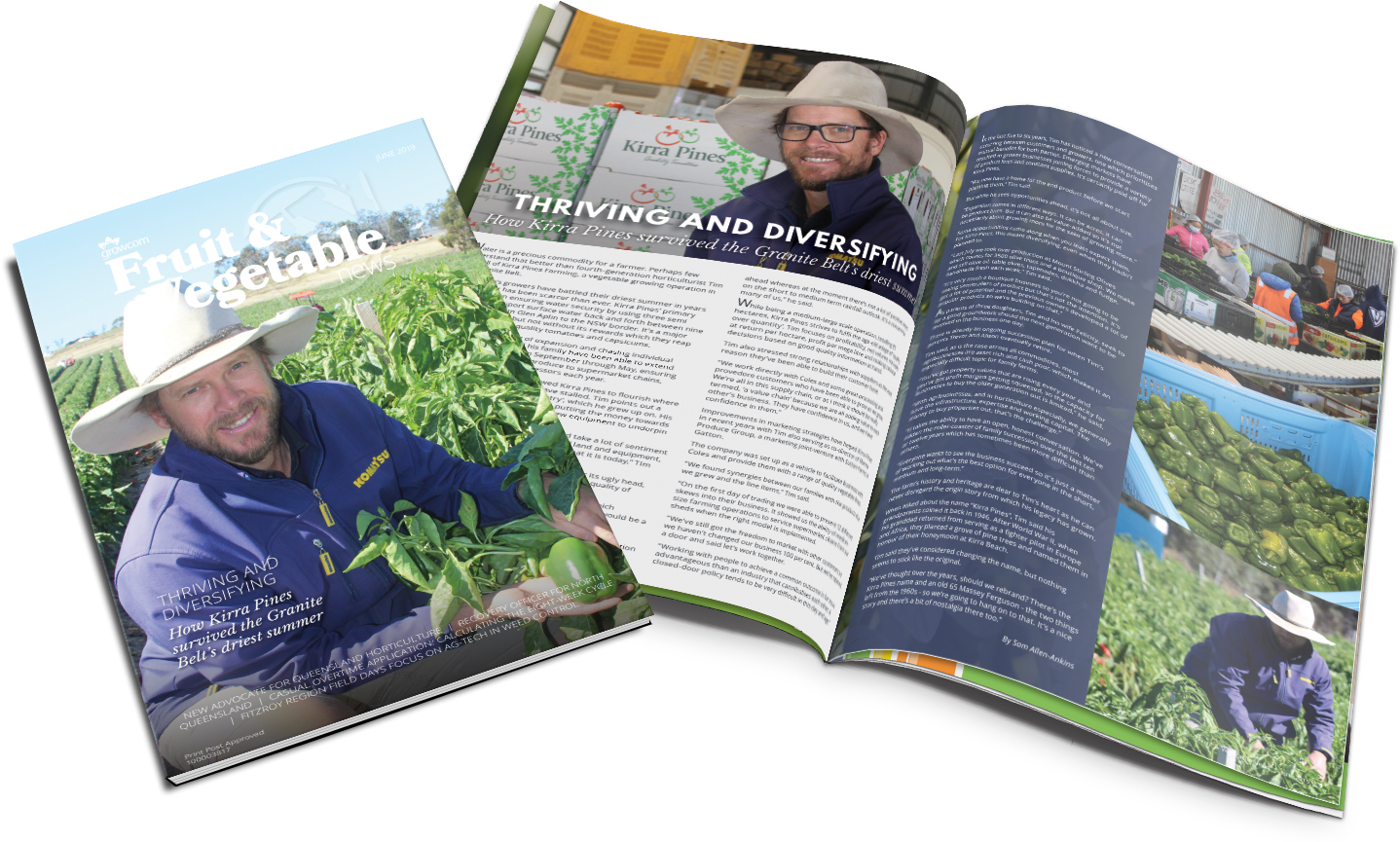