Hampton, top of the range

Where local is more than just a slogan

Seven hundred and sixteen metres above the South East Queensland coastal plain, at the top of the escarpment on the Great Dividing Range, sits the picturesque village of Hampton.

Every year in May the community comes together for the Hampton Festival in celebration of regional food, wine and music, along with the creativity of the region’s artists.

For sixteen years the festival has fostered a thriving farming culture in the ‘High Country’ where food is revered as one of the most important aspects of the region.

Farmers and edible gardeners, from Toowoomba through to Crows Nest, gather together to sell their produce and value-added products at the ever-popular Community Produce Stall along with a diverse range of other market stalls.

Between 4000 to 5000 visitors flock under the shade of majestic blue gums to meet with local farmers, hear their paddock to plate stories and witness food demonstrations held at the Growers on the Green Precinct.

In recent years Hampton has cause quite a stir, earning its name as one of the richest and most diverse growing areas in Queensland.

The town’s emerald hue has enticed many a passerby, including award-winning chef and ex-Bundaberg local Amanda Hinds who opened her own restaurant in the region to show off its bountiful produce.

After leaving Bundaberg, where they owned and operated the award-winning cafe Indulge, Amanda, her husband Larry and their children Oliver and Sabine, decided to embark on a new adventure that celebrated the spirit of community.

Just a thirty-minute drive north of Toowoomba they opened Emeraude, a micro region eatery serving a variety of modern Australian dishes in a floral space.

The restaurant has a philosophy of supporting local farmers and micro region producers. Its menus highlight the region’s freshest seasonal produce, often changing on a weekly basis.

According to Amanda, ‘farmers set menus, not chefs’.

She said some of Emeraude’s suppliers are so close by they walk to the café to make deliveries.

“Just about everything’s traceable and because it’s all made here at the restaurant we can tell you exactly what’s in it,” she said.

“We have a ginger grower from Hampton who provides exclusively to us. If I jumped on the phone to him now, he’d be here within the hour with fresh ginger.”

Amanda’s move to Hampton two years ago became a catalyst for the region to re-discover all it had to offer to the outside world.

Alongside a passionate group of locals, she helped form the High Country Hamlets, a community tourism group which showcases the region’s leading food producers, cafés, restaurants, accommodation and shopping to promote satisfying experiences in a relaxing high country environment.

The group has already amassed close to 70 members despite being in only its second year.

The group helps sell the story of growers, who despite being the backbone of the industry, often shrink behind humble pretenses.

In meeting growers face to face, Amanda has been able to impart how precious their produce really is to her customers.

“When you let growers know that their produce is really important to you it makes all the difference,” she said.

“When growers provide to central markets I think it can sometimes be quite a nameless and faceless exchange. But it’s important to us they know how much we believe in their product. We want to tell everybody about it!

“When I write on a menu ‘rhubarb from Halo Farm’ or ‘Sunnyspot avocados’ or ‘Murray’s beetroot’, there’s an ownership involved which means you’re never going to get bad produce. You’re only ever going to get the crème of the crop.”

In championing local produce, Amanda has been able to encourage growers to save a portion of their harvest for local consumers.

“By using pecans out of North Burnett, we’ve stopped them from giving everything to the big guys and helped them value their own product,” she said.

“Instead of sending a bulk product to Melbourne, they now market them as a specific product – the Munduberra Pecan!”

Coming from a successful background in business, Amanda has been able to offer mentoring to growers in the community looking to take the next step in business.

In the spirit of sharing, Amanda even recommended one of her tomato growers sell his produce to other local eateries.

“I had a grower who grew deliciously sweet amoroso tomatoes specifically for us and I told him ‘why don’t you make them available to other restaurants?’” she said.

“Before too long he had a whole other business, supplying to cafes and selling small punnets through foodworks.”

The High Country Hamlets has played a large part in encouraging the community to collaborate in ways they would have never imagined.

“Doing this rhubarb soft drink has been quite enlightening since using fresh produce in fizzy drinks is quite rare.”

Amanda credits the High Country Hamlets’ rapid success to the generosity of its members who continue to bend over backwards to make themselves available when journalists come calling.

Local avocado and passionfruit growers Daryl and Sally Boardman of Sunnyspot Farms have often taken visitors to visit their farm on the edge of the escarpment, where they can see stunning alluvial, soft red soils and a view that looks back towards the coast.

Clearly passionate about his work, Daryl was kind enough to share his expertise with the President of the High Country Hamlets, Chip Saint who has started growing his own crops.

Chip said he and his wife, Jo were nomadic creatures before they bought a property in Hampton more than a decade ago.

“Our parents had grown rhubarb and garlic so we thought we’d follow in their footsteps,” Chip said.

“But we had no idea how to do it until Daryl let us dig up rhubarb crowns from one of his paddocks.”

“He then asked whether we’d considered growing avocados. He suggested we give it a go and that he’d help us out.

“Because we move around so much, we’re normally interlopers in communities but this is where we’ve decided to live and the community has been fantastic.”

Another business involved in the High Country Hamlets is Hampton Blue, an organic blueberry and raspberry orchard within walking distance of Emeraude.

The multi-generational family business flowing from grandparents to grandkids, is one of the only organic blueberry growers in the region.

Currently they have around 20-30 acres planted – 90% of which are blueberries. They don’t export any of their produce but have a wholesaler in Brisbane, and an organic wholesaler in Toowoomba who sell to organic stalls.

Grower Andrew Groom said supplying to the Northey Street Organic Markets in Brisbane is one of the best experiences with regards to being in the organic industry.

“People are doing their weekly shopping at the market and the beautiful thing is you’re getting to meet the customer,” he said.

“It’s nice to gain an understanding of why they’re purchasing an organic product over a traditional product.

“There’s nothing better than when they take a bite of our blueberries and say “so that’s what they are supposed to taste like!”

As well as being a supplier of berries, Hampton Blue has a full working kitchen on farm where they make jams, sauces and vinegars using their own produce.

These products are sold at the Hampton Festival as well as at the local Visitors’ Information Centres and Emeraude.

Andrew’s mother, Sue has long been an active contributor to the Hampton Festival where she is also a regular stallholder.

Over the years, the Grooms have become deeply entrenched in the community, having also been involved in the annual Hampton Farm Trail & Long Lunch held in May.

The unique event can be described as an informative on farm experience, whereby participants visit several local food producers’ properties before arriving at a secret lunch location nestled in the middle of a working farm.

This is where the Grooms first met Amanda when she was just visiting Hampton. Little did they know what the future had in store.

The Long Lunch was enough for her to fall in love with the region and its stunning array of produce.

Since opening Emeraude, Amanda has regularly sought produce from the Grooms whose berries are renowned for their sweet and full flavour.

From a tourism and food point of view, she sees the capacity for Hampton to offer these experiences on a seasonal basis.

Soon the region will be celebrating another special occasion when the High Country Hamlets present the Wisteria Spring Lunch in September.

Amanda said it’s all about embracing the outdoors, eating local food, dancing on the grass, having a few drinks and enjoying what spring has to offer in the area.

“People don’t just want to visit a place to see it, they want to taste it too,” she said.

“When you come up here, and you are eating the blueberries and the lemon curd and the mushrooms, you know you’re eating the food of this region.”

Something’s definitely in the air as Chip has noticed a recent real estate boom in the last year as Hampton attracts a younger demographic.

“There’s more people buying and younger people everywhere,” he said. “It’s almost like a new broom has swept through.”

“Once people realise that we’re very serious about what we’re doing and that we’re going to be a massive driver for this area, more support will come,” she said.

Chip said the High Country Hamlets association is at grassroots but is moving at the rate of knots.

“Diversity is our greatest strength,” he said.

“Our long term view is to put this micro-region tourism initiative in a box and offer it to other regions interested in a similar concept. We want to let others know what’s worked for us, and if others like it, we want to help them succeed too!”

For more information on the Hampton Festival visit: www.hamptonfestival.com

For more information on the Hampton Country Hamlets visit: facebook.com/highcountryhamlets

Hampton, Top of the Range is featured in the August 2019 edition of Fruit and Vegetable News. 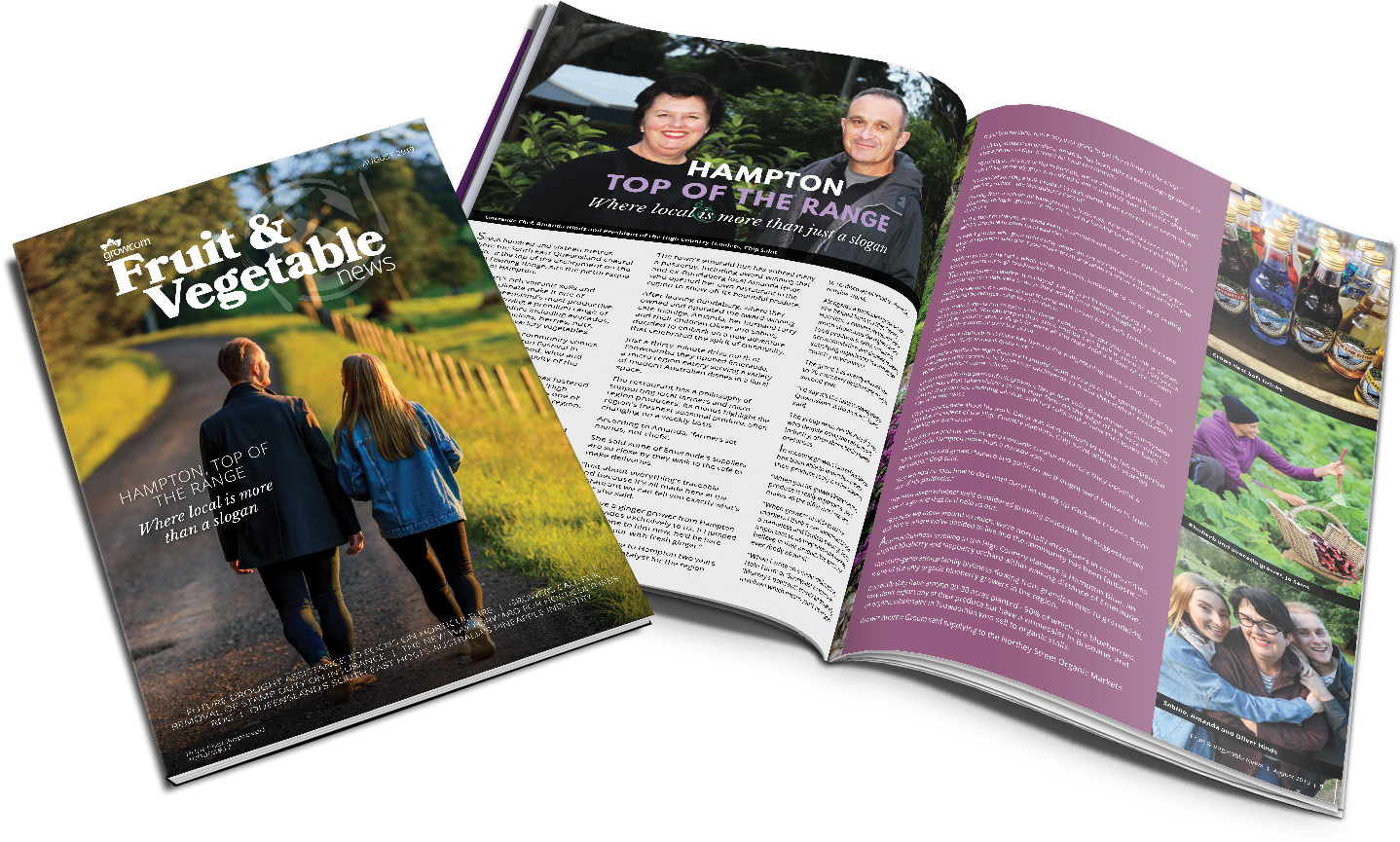