Cyclones, floods, fires, crippling droughts and exotic pest incursions – you name it, Queensland horticulture growers have faced it. But just like a cat, Queensland growers always seem to land back on their feet.

Since the emergence of our industry’s latest adversary, the human health pandemic – coronavirus, adjusting to ‘the new normal’ hasn’t been easy. Many growers woke up to discover their market had vanished overnight.

Faced with this reality Jade King from Green Valley Finger Limes on the Sunshine Coast was forced to turn to new markets for her fresh produce or risk having to shut the doors.

For years she’s relied on supplying mainly to restaurants but the abrupt closure of the hospitality and tourism industries forced her to completely re-evaluate her customer base.

“Everything changed when restaurants closed.” She said. “The national market dried up overnight. I had a fully loaded orchard but nowhere to send my fruit. And to top it off, my exports to Italy stopped.”

Determined to not let her produce spoil, Jade turned to social media for support. The response was overwhelmingly positive with one of her Facebook posts reaching more than 15,000 people.

She began selling fingerlimes online and opened her gates for locals to collect fruit directly from the farm if they practiced social distancing. For every order she supplied double, sharing what would otherwise go to waste, as a special thank you to her new customers.

Jade redirected her focus towards packing punnets for local fruit stores and special custom orders. She even teamed up with fellow Sunshine Coast businesses for The Crate Collective, a farm food box service which delivers premium products not normally available to the public unless they are dining out.

With restrictions now easing and restaurants reopening, Jade’s confident her customer base is stronger and more versatile than before.

“There’s been an amazing outpouring of community support. I have people messaging me all day asking for more [fingerlimes] and where they can get them,” she said.

Any leftovers she gives freely to local chefs who have returned to work. It’s a time-consuming process given she does everything by hand: picking, packing and labelling each punnet. She was hoping to employ a new farm hand this year but the pandemic disrupted her plans. Instead she’s relied on a handful of stranded backpackers who she accommodates on-farm in return for working in the orchard.

The Australian native variety is known for its long-shelf life and for being a consistently cropping cultivar.

Jade said she’s glad she took the advice of a nursery early on in choosing to plant 350 trees of the hardy variety.

“It was the best decision we could have made. The Champagne Red has year-round flushes of flowering, as well as heavy spring flowering, allowing supply through all seasons,” she said.

“They produce seedless fruit when not-cross-pollinated which makes them hassle-free for chefs to use in the kitchen, and they keep for a lot longer than other varieties which make them a preferred finger lime for export.”

The Champagne Reds are cylindrical in shape, up to 120mm long and only 20-30mm in diameter – about the width of a finger. You know they’re ripe and ready to harvest when they a deep reddish maroon. But it takes determination to pick them because without gloves you’ll withstand tens of tiny cuts from the thorny bush on which they bloom. This makes it even more satisfying when you finally crack open their starch skin, bursting with glossy citrus caviar, and taste the delectable lime flavour for yourself.

It’s no wonder they’re popular in the kitchen. They’ve even attracted the attention of MasterChef Australia.

“I’d just finished up in the field and was heading off to teach when I got a call asking whether I could send five kilos of finger limes to Noosa. I was so busy at the time I thought well you’re going to have to come and get them,” she said.

“When I found out they were for MasterChef, I swallowed my pride really quickly. I said ‘I suppose I should race them up to you then.’ But they were more than happy to come to the farm anyway.”

Now in its fifth year of operation, Jade is proud to say her farm is sustainably managed and largely chemical-free apart from the odd herbicide here and there.

Her background as an agronomist informs her eco-friendly approach to developing a healthy farming system that welcomes frogs, birds and bees who proliferate when the crop is in bloom.

“But you’ve got to be careful because sometimes you’ll be picking and a bird will fly out at you,” Jade said.

It’s an undeniably picturesque setting tucked between the hinterlands, well within driving distance of the local school where Jade teaches. Her students are no strangers to the farm which they use as their ag-plot for the study of agricultural science.

Other farmers might drop dead before letting a bunch of strange teenagers roam through their orchard but not Jade. She delights in sharing her passion for agronomy with the younger generation. As a self-proclaimed ‘Aggie’, she loves bringing out the ‘Aggie’ in her students.

“It’s a valuable learning opportunity and it gets them out of the classroom and into the field.” she said.

“Where else are they going to learn?”

Despite obvious challenges of late Jade remains remarkably positive-minded. Between harvesting, packing produce, delivering orders, arranging pickups, teaching at the local school and raising three teenage children, she doesn’t have the luxury to lament on yesterday.

Fortunately, she hasn’t had to chase after new customers – they call her! But she suspects this will soon change now that 850 more trees have come into production, tripling her operation.

“I think breaking into supermarkets is necessary for our future,” she said.

“I see no reason why finger limes shouldn’t be sitting alongside blueberries and strawberries in every supermarket across Australia. They’re a beautiful Australian fruit that deserve their due.”

Green Valley Fingerlimes is featured in the July / August 2020 edition of Fruit and Vegetable News. 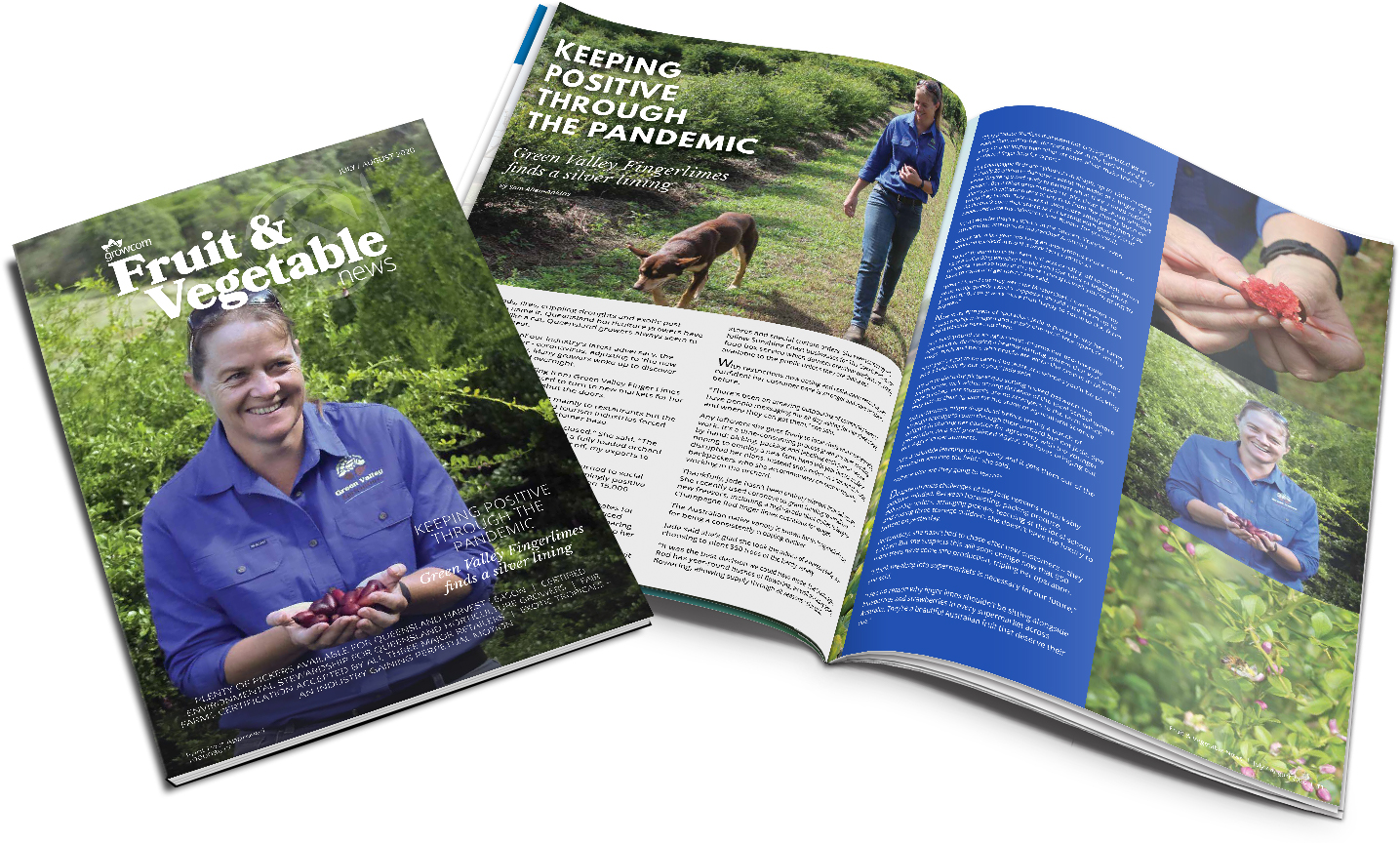