Despite the threat of disaster at their doorsteps, Arnhem Mangoes has come out the other side of harvest season completely unscathed.

The mango production in Darwin is lucky to still be standing after bushfires and gusty winds wiped out millions of dollars’ worth of mangoes in the Northern Territory just waeeks before picking.

Owner Barry Albrecht said he could feel the fires on the outskirts of his property.

“That day we had extremely hot and dry winds. They were unreal and hard to control,” he said.

“We had to turn the water up on our irrigation system.

“Good thing we’re pretty well protected. We burn off around our farm in our dry season just to keep our orchards safe.”

Admittedly, he’s one of the lucky ones who’s been able to properly enjoy the dry season.

“The weather has been good to us. No rain,” he said.

“And a longer harvest season meant we had cooler mornings than usual – perfect for picking.”

Arnhem mangoes wrapped up an eight week harvest season in November with more than 180,000 trays of mangoes.

Give or take 6 million pieces of fruit this year alone.

Barry gave thanks to the region’s climate for preparing his fruit for an early harvest.

“The Northern Territory is the best place to farm mangoes because we’re first to the market and get better prices,” he said.

“Our fruit started ripening in September way before our Queensland competitors.”

Barry said between his orchards in Lambells Lagoon, Berry Springs and Mary River, he has somewhere near 30,000 mango trees spanning three different varieties.

“We grow KPs for the Domestic Market, R2E2s for the export market, and Keo Savoy for the Asian market,” he said.
“Woolworths get the first chop of the cherry. About 80 per cent of our fresh produce. What’s leftover goes to our agents and that could go to Aldi, Coles, markets, anywhere really.”

“About 25 per cent of what we pick isn’t good enough to be packed so it gets juiced.”

Barry said he’s proud Arnhem Mangoes has kept a strong working relationship with Woolworths for nearly ten years, having taken part in a commercial for the supermarket’s Road Trip campaign in 2018.

“Woolworths have been a great supporter of ours,” he said.

“We’re prouder than anything to supply our top-quality mangoes to stores across the country. Knowing our mangoes get enjoyed by so many Australians is satisfying.

“Our national distributor Primary Connect has been great at providing transport services to all major cities.”

When it comes to the labour force, Barry has no trouble sourcing hands for harvest. Arnhem’s good name means workers practically line up to get a job.

Once made up mostly of backpackers, in recent years, Arnhem’s workforce has shifted to accommodate seasonal workers.

This year was their third season of using the Seasonal Worker Programme through which they employed 108 pickers and packers from Vanuatu.

Barry said the whole business has seen an influx in productivity as a result.

“Everyone’s said it’s the best move we’ve ever made,” he said.

“They’re the loveliest people to work and they don’t whinge. People say you don’t even know the shed’s running it’s so quiet. They’re just heads down.”

Barry takes additional measures to ensure the farm is an attractive place for his workers by supplying them with clean accommodation and a full time chef.

“Their beds are made every day. Their linen is changed every week. Their uniforms are washed and ready with their names on them everday,” he said.

Barry continues to employ a handful of backpackers but said the Backpacker Tax made things more complicated.

“There’s a lot of silly things that don’t make sense, like they want to charge them superannuation. Why? They’re here to make a few dollars and you want them to spend that money while they’re here in Australia,” Barry said.

“And now they’ve brought in a 38 hour week. Otherwise penalties will fly.

“As far as I’m concerned it tarnishes our relationship with backpackers and seasonal workers. These blokes don’t want a 38-hour week, they want to work every hour they can get.

“And our mangoes don’t wait for anyone. If they’re left on the tree too long, they’ll rot.

“Three per cent of people in Australia are farmers. People putting these laws in, they’ve never owned a farm. No one has put any thought into this. It’s actually destroying the industry.”

“Most farmers treat their workers right but we can’t afford to pay time and a half or double time. There’s not that much money in mangoes.”

To prove their commitment to fair employment practices, Arnhem Mangoes recently become certified with Fair Farms, an industry-led Training and Certification Program by Growcom with support from the Fair Work Ombudsman, The Federal Department of Agriculture and AUSVEG.

The program aims to stamp out workplace non-compliance and worker exploitation by rewarding growers who are doing the right thing and using market forces to drive out unethical and unlawful employment practices.

Barry said they passed the certification process with flying colours.

“When the auditor saw our shed – he was gobsmacked,” he said.

“I mean this place is schmick. It’s cleaner than a restaurant. You can eat off the floor it’s that spotless.”

For Barry, becoming Fair Farms certified was a no-brainer. Especially between the choice of doing compliance assessments through SEDEX, an English program, or Fair Farms which was specifically designed for the Australian horticulture industry.

Over the forty years he’s been in business, Barry’s become somewhat of an expert at growing mangoes.
“A lot of people come to me and ask me what to do,” he said. “There’s a lot of things you read in the book that aren’t right.”

“I may not have a great formal education but I’ve learnt a lot. And a lot of it has cost me a lot of money. The mistakes I’ve made I won’t do them again. That’s life. You learn from your mistakes.

Arnhem Mangoes is featured in the December 2019 / January 2020 edition of Fruit and Vegetable News. 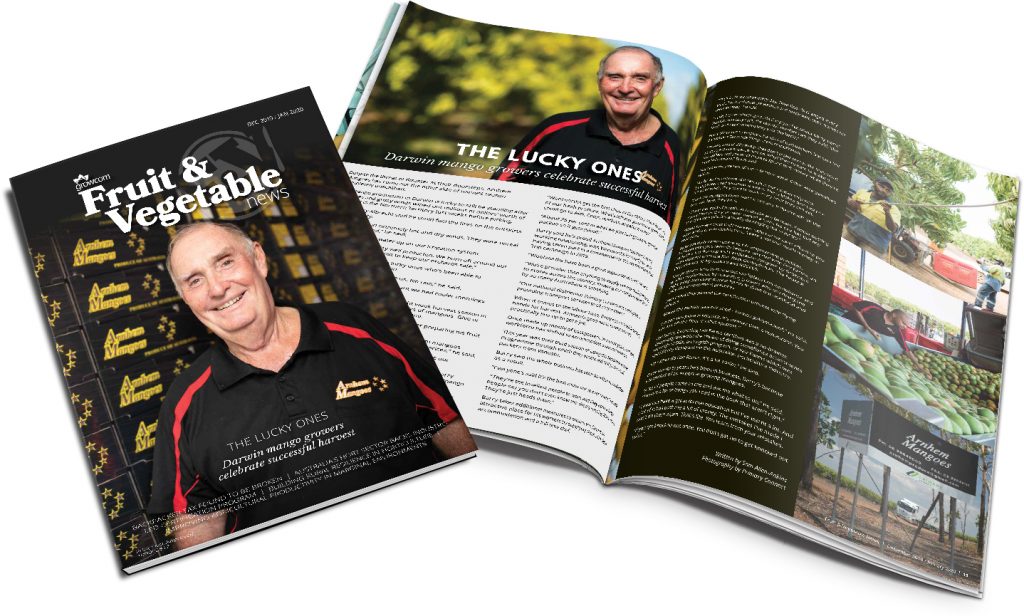